Which side are you on?

Posting from Jerusalem seems to be harder than I thought. On Sunday morning, Rosh Chodesh Tammuz, I joined Women of the Wall for morning services. In addition to being a prayer service, it was also an action in support of civil rights. This was my first time at Women of the Wall so I want to describe the whole experience as best I can.

I arrived very early, remember morning is probably the coolest time of the day, via taxi. I was wearing a baseball hat to stay out of the sun (and maybe to cover up a bad hair day). There was the usual walk through a metal detector and opening my bag for the police which was no problem.

Since my last time at the Western Wall, the women’s section has gotten smaller. Much smaller. It is clear that the attempt to make this space into a synagogue is much more deliberate. Being there early, it wasn’t too crowded. It was evident when the police and army officers arrived in order to protect this group. Several stood behind the divider on chairs.

One of the guards behind the women's section.

Guards were on the men’s side also on chairs to keep people away and prevent flying objects. Two guards assembled on the women’s side. One, a woman, video taped the entire experience. At 7:30am the women gathered, seemingly led by Nofrat Frankel (the woman arrested for wearing a tallit) at the very back of the women’s section in a large sort of clump. Everyone stood save one older woman who grabbed a plastic chair. You can see from the video that I posted below that women are not allowed to wear their tallit (prayer shawl) the traditional way, they must be worn like a scarf wrapped around the neck. It is a completely disgusting that there are now laws legislating the “way” people can pray. Don’t worry, there will be more gross things that I have to report.

In terms of prayer-book, I brought my travelers’ version of Mishkan Tefilah. It was almost entirely inadequate because this service followed a traditional order of prayer more in line with what many who probably read this blog would call orthodox. I sort of knew this would be the case and I mostly didn’t care. I hate the Western Wall. It might be one of my least favorite places in the world. While I know that it is holy and extremely important for some people, the prayer experience wasn’t the principle reason for my visit.

This was what the group looked and sounded like.

During the service there were a few disturbances. First, a man on the ‘other’ side started screaming that what we were doing was forbidden according to Jewish law. He was ranting and raving and it was basically after nothing had happened beyond the recitation of several verses aloud from the prayer service. The police seemed to know this was going to happen and they quickly ushered him away from the group, though he continued to raise his voice in an awkward song of protest as though he was trying to block out our voices by making more noise then we were. At another point a woman approached the police and said something to the effect of, “what are these women doing? This is a place for all people and they are disturbing everything.” She ranted for a few moments but that was basically the end of it.

At the end of Hallel, I linked arms with my friend SAR. Somehow we ended up slowly leading the group of women singing “Ozi v’zimrat Yah, v’yhi li yeshua” from the Song of the Sea and Psalms. (Remember the Torah scroll wasn’t allowed into the women’s section though there were several on the men’s side because of what happened last summer. We reached the exit of the Kotel plaza.

Anat Hoffman of the IRAC facilitates the woman holding the Torah scroll joining the group of women.

Several members of the group were standing just outside the security check point with the Torah scroll. When the group joined up with the Torah, I had a greater sense of the magnitude of this event. This wasn’t just a prayer service. For some of the passersby it was perhaps the first time seeing a woman carry a Torah scroll. All in all this was a  tremendous act of defiance against the orthodox stronghold over who makes the rules for Judaism.

The Torah reading at Robinson’s arch was really lovely. There was the musaf service also which isn’t my cup of tea (you can ask me about that offline) so I was chatting with a few of my colleagues a few steps away from the group. There was a brief Kiddush. Members of the Women’s Rabbinic Network took a photo. 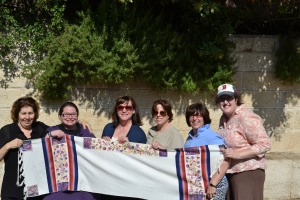 On the left is Anat Hoffman, executive director of the Israel Religious Action Center, is holding up her tallit made exclusively for Women of the Wall. You too can purchase one of these tallitot which is a fantastic way of reminding yourself the privilege of wearing a tallit isn’t something to be taken for granted. Women of the Wall and IRAC are always looking for more support for their important work whether monetary or joining them in action whenever the opportunity arrises.

One of the highlights of the experience was getting to take a picture with Anat who is unquestionably one of my heroes.

I am a rabbi living in North America. I was ordained from HUC-JIR. This is my blog.
View all posts by rabbisteinman →
This entry was posted in Israel, Peace, Politics, Torah. Bookmark the permalink.